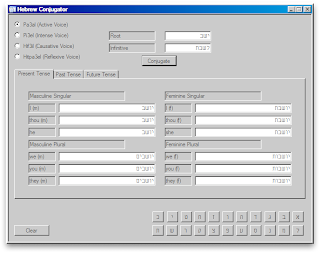 For the past few weeks, I have been working on a Delphi Prism project, a Hebrew verb conjugation program. It is meant to handle regular as well as irregular verbs.

The base class also defines as constants all letters of the Alefbet (Hebrew alphabet), helper methods to access the characters (for example to modify final letters when appropriate), and empty conjugation methods that simply return empty strings.

An object of the type HebrewWord creates an object named conjugation first of the type Conjugation (i.e. the base class) and then of the correct type (e.g. ConjugationPa3al) if such a class already exists. (This means that all conjugations will technically work and not throw exceptions. If a conjugation is not implemented yet, it will return empty strings for any finite verb form requested.)

The Windows.Forms front end doesn't work on Mac OS X because of, I think, a bug in how Mono handles right-to-left scripts. (Input also doesn't work. I reported the bug to Novell.) So the current version runs on Windows (and perhaps Linux, I haven't tried).

I was planning to build separate front ends for Mac OS X (Monobjc) and Linux (GTK#) anyway, also for WPF and Silverlight (if I find the time).

Plus I plan to add an option to save a root and all finite forms in a (Blackfish SQL) database so that a conjugation once corrected and confirmed can be remembered by the program and accessed when the same root is asked again.

passive conjugations: not supported at all for the moment